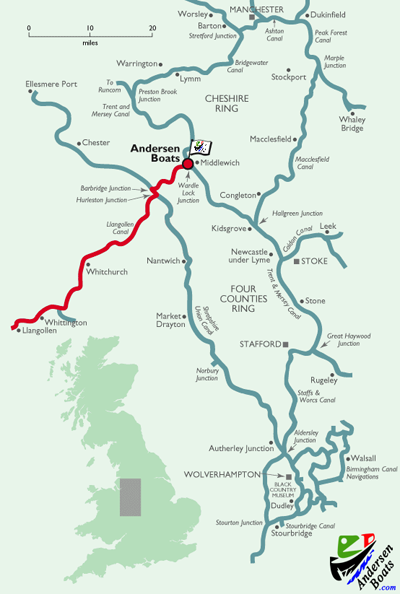 The Llangollen Canal is justifiably one of the more popular boating holiday canals in Britain. Most of its route is through unspoilt agricultural countryside, but with just enough locks and waterside villages to add interest. As the canal winds its way into Wales, it also features outstanding scenery and some world famous aqueducts. There are also has several short tunnels on this canal, to add to the excitement.

Through rural Cheshire towards Wales

Leaving Middlewich by way of an arm of the Shropshire Union Canal, the route has fine views over the valley of the River Weaver before making its way directly through an area full of Shropshire's 'black and white cows' to the main line of the canal. Here a short deviation would take you to the 'black and white buildings' of Nantwich.

Turning off at Hurleston Junction, the Llangollen Canal itself then ascends a short flight of locks and sets off across open country, winding its way through Wrenbury under quaint old wooden lift bridges. It is worth pausing at Marbury for a short walk up to its remarkable church. As a bonus, several of the locks on this section have good pubs adjacent. At Willeymoor you don't have to walk at all, because there's a delightful pub slap bang alongside the lock.

Gradually you have become used to locks, but at Grindley Brook half a dozen come all at once, the top three being telescoped together as a 'staircase' which can be something of a bottleneck in the summer season, especially on Thursdays when all the boats that have travelled towards Llangollen from the English end of the canal are busily heading back to base. Boaters have been in the habit of taking a taxi or catching the bus from Grindley Brook into nearby Whitchurch, but part of the old arm which once led right into the town has been restored to provide visitor moorings, and it is difficult to resist mooring up here and walking into this interesting old country town, famous as a centre of cheese-making. In the heyday of the canal a special cheese boat left here daily for Manchester, its hold covered with white canvas to keep the cheese as cool as possible. Beyond Whitchurch there are no more locks for many miles, though there are a number of lift bridges to be raised and lowered with the same windlass you use for operating locks.

Ellesmere on the Llangollen Canal

Passing briefly in and out of Wales, and crossing the mysteriously remote 'mosses' the canal reaches Shropshire's 'Lake District', skirting several of the charming meres which were formed hereabouts the end of the Ice Age.

One of them, Blake Mere, is separated from the canal by the slenderest of margins, and makes a beautiful spot for a picnic.

The town arm provides pleasant moorings near to the canal company's original workshops, still used by British Waterways as a maintenance base, and the staff here welcome enquiries from passing boaters.

The Montgomery Canal and back into Wales

Popularly known as 'The Monty' the Montgomery Canal is often a forgotten canal as narrow boats on the Llangollen canal rush past the junction at Welsh Frankton in their narrow boats with hardly a second glance at the white signpost and its finger pointing to the top lock. The Montgomery Canal had been abandoned after a breach in 1936 having previously suffered poor ground problems and leaks. It decayed, unnoticed and abandoned, until those who cared, backed by the Inland Waterways Association, persuaded British Waterways that The Montgomery Canal could be saved for future generations and Frankton Locks were restored in 1987 but stood idle for almost 10 years. It has been a long journey with several setbacks along the way and every inch has been a struggle and a triumph. The Montgomery Canal now has a relatively short stretch of 7 miles navigable by canal boat with several formidable obstacles still to overcome. Hope continues that one day The Montgomery Canal will become one again and the whole length to Welshpool, and perhaps Newtown beyond, will be available for canal boats to cruise. This really is a totally different canal from the Llangollen Canal and, to cruise its length whilst on your canal narrow boat holiday is akin to turning off the motorway and taking to the country lanes instead.

At New Marton you pass through the last pair of locks on your way to Wales. Soon the canal is running parallel to the London-Holyhead road. Then it turns a wooded corner and you are confronted with two huge stone bridges, an aqueduct and a viaduct, carrying the canal and a railway respectively, across the valley of the River Ceiriog, from UK into Wales.

Border crossings don't come much more dramatic than this, especially as, on reaching the far side of the aqueduct, the canal plunges almost immediately into a long tunnel. From moorings at either end of this tunnel it's a short walk into the little town of Chirk, useful for shopping and with a 14th century castle to visit as well. The mountains, which have been simply pale outlines on the horizon, become more tangible as the canal slips into Offa's Dyke country.

Winding through woodlands you come to the River Dee and Pontcysyllte Aqueduct, the most astonishing feat of waterway engineering anywhere in the world. The 18 kilometres of canal from Chirk to Llangollen was awarded World Heritage site status by Unesco in 2009. A hundred and twenty feet above the river, in an iron trough no wider than the width of you boat, crossing the aqueduct is tantamount to flying through mid air!

You could be forgiven for thinking that the last lap into Llangollen would be an anti-climax. It is nothing of the sort, as on a high shelf above the Vale of Llangollen and surrounded by high limestone ridges, the canal makes for its terminal wharf.

Twenty six hours cruising away from Middlewich, should leave you with plenty of time to explore some of Llangollen's well known attractions. Take a ride further on along the Dee Valley by steam train; visit Plas Newydd, where the Ladies of Llangollen were the centre of gossip in the 18th century; climb up to the ruins of Castell Dinas Bran, over a thousand feet above sea level; visit the Canal Exhibition Centre; stroll along the last two unnavigable miles of the canal to the famous Horseshoe Falls; or just wander about the charming streets of the town, grateful that you haven't got to find a parking space! 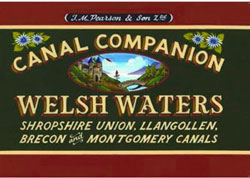