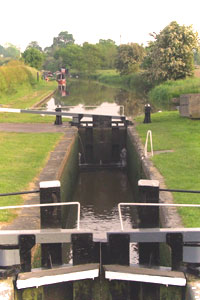 There’s no mystery to using canal locks – just a series of step-by-step tasks. Know the procedure, take your time and you’ll be on your way with no problem.

A canal lock is simply a chamber with gates at either end. By emptying or filling that chamber with water, your boat can move up or down onto a new section of the waterway.

Although there are many different kinds of canal locks, they all work on a similar principle. With the lock gates closed, you open sluices (the paddles) to let the water in or out. When the water level under your boat is the same as the level you’re moving to, you simply move in or out of the lock.

Some locks you operate yourself and others are operated by lock-keepers. Check your particular waterway for details. Always obey specific lock instructions and local information.

What is a paddle?

The paddles are the valves by which the lock chamber is filled or emptied. A paddle is simply a sliding wooden panel which when “lifted” (slid up) out of the way allows water to either enter the chamber from the upper pound or flow out to the lower pound.

A gate paddle simply covers a hole in the lower part of a gate; a more sophisticated ground paddle blocks an underground culvert. There can be up to 8 paddles (two gate paddles and two ground paddles at both upper and lower ends of the chamber) but there will often be fewer.

Upstream paddles fill the lock. Downstream ones empty it. Paddle gear can be either hydraulic or rack and pinion. On the rack and pinion type, remember to engage the safety catch before winding up the paddles. This stops the gears from slipping down. When you’ve finished winding the paddles up, check the safety catch is in position and then take off your windlass. (What’s a windlass?  See below)

With one crew member at the helm and one at the paddles, you wind the paddle gear up and down using a windlass or lock key. You should always wind them bit-by-bit – and keep an eye on the effect of the moving water on your boat. 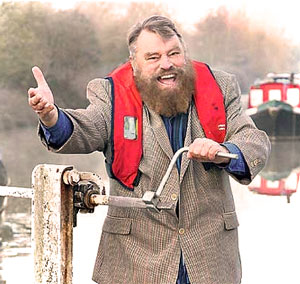 This is a detachable crank used for opening lock paddles (NOT the winding mechanism itself). The simplest windlass ia an iron rod (circular section, about half an inch in diameter and three feet long) bent into an L-shape, with a square socket at one end for fitting onto the “stub” protruding from the lock winding gear. Most have two sizes of socket, for different locks standards.


There may be refinements such as an extensible handle (for stiff paddles), or a free-rotating cylindrical sleeve around the handle (to prevent blisters). On canals with well-maintained (easy-to-lift) paddle gear, crews often prefer to carry a smaller, lighter windlass made of aluminium. Most boats carry three or four windlasses of different types.

As you approach the lock, send one of your crew to check whether it’s full of water or empty. If it’s empty, they can open the gates and you can steer straight in. If it’s full, moor up below the lock, far enough away to avoid the currents while the lock is emptying. Empty the lock by slowly raising the paddles. Open the gates and steer in.

Close the gates and the paddles (or check that these are already down if the lock was ready for you).

If there are ground paddles by the top gate, open these first. Wait until the lock is half full before opening the gate paddles. If there are only gate paddles, open them very slowly, especially if the paddles are above the low water level.

When it’s full, open the gates and take your boat out. Lower the paddles – and close the gates behind you unless a boat coming towards you wants to use the lock. If the gates don’t open or close easily, wait till the water level’s absolutely equal. If there’s still a problem, close the gates and paddles, check for trapped debris and remove it with your boat-hook.

Check that the far gates and paddles are closed and then fill the lock – if it’s not already full – by opening the paddles at the end nearest to the boat. When the lock’s full, open the gate and steer in. Close the gates and lower the paddles. Keep the back of your boat well clear of the cill on the top gates – cills stick out by up to 5ft (1.5m) and you can only see them when the lock’s emptying.

Open the paddles in front to empty the lock, using your engine or ropes to keep the boat as still as possible.

When the water levels are equal, open the bottom gates and take the boat out. Close the gates and lower the paddles before you move on, unless a boat coming from the opposite direction wants to use the lock.

Always share a lock if you can. And, if the lock’s set against you, check for boats coming from the other direction. The lock will be ready for them to use and it’ll save unnecessary emptying and filling.

It’s sometimes possible to get two short boats end-to-end in a narrow lock, but check that you both have enough room to avoid the cill and gates. The heavier boat should always go in first, so that the water flow doesn’t pull it into the lighter boat.

In broad locks, boats should be kept to the side with ropes looped round the bollards. Open the two paddles equal amounts, at the same time where possible – and slowly. Some lock walls taper from top to bottom so if you’re travelling side by side with another boat, make sure there’s plenty of room between you.

You’ll come across a whole range of bridges on your travels. Some are fixed and some need to be moved out of the way to let your boat pass. Get information on what sorts of bridge to expect on your journey from the navigation authority or by reading a local waterway guide. 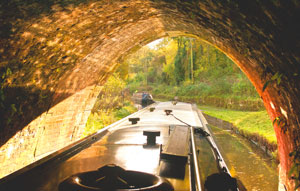 Bridges can be narrow too, which means river water tends to speed up as you get nearer. This can draw your boat towards the bridge, so stay alert. Boats traveling downstream on rivers have the right of way at bridges and narrows.

Don’t forget you can download the Boaters Handbook here.

How to operate a canal boat